Today , Feb 12 is celebrated as National Plum Pudding Day! So let’s make this magic pudding, it can be made well in advance and gets better with age.

You can make this recipe up to 2 months ahead. Cover the pudding in the basin with plastic wrap and foil. Store in fridge. To reheat a pudding: Remove the plastic wrap and foil from the pudding. Repeat step 5. Place an upturned heatproof saucer in the base of a large saucepan. Fill one-third of the saucepan with water and bring to a simmer over low heat. Lower the pudding basin into the saucepan. Simmer, covered, over medium-low heat for 1 hour or until the pudding is heated through. Remove basin from the pan and serve.

Find this and many more recipes at www.taste.com.au 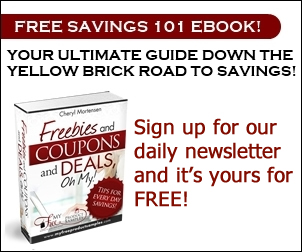 If you don't already have Amazon Prime, now would be a good time to get their 30 Day Prime Trial. … END_OF_DOCUMENT_TOKEN_TO_BE_REPLACED

Hurry on over to Walgreens.com this week until 4/11 and score 2 FREE Speed Stick Deodorants!  Just … END_OF_DOCUMENT_TOKEN_TO_BE_REPLACED

Here are the newest printable coupons for the day. You can save on brands like Benadryl, Playtex, … END_OF_DOCUMENT_TOKEN_TO_BE_REPLACED